Extension Description: This Extension adds the possibility of performing surveys with multiple people to your topics.

This Extension is intended to be fully backwards compatible to the existing phpBB 3.0.x Mod "tabulated survey at topic head" from the asinshesq (see here) for upgrades, but includes additional features.
It is, however, a complete rewrite. 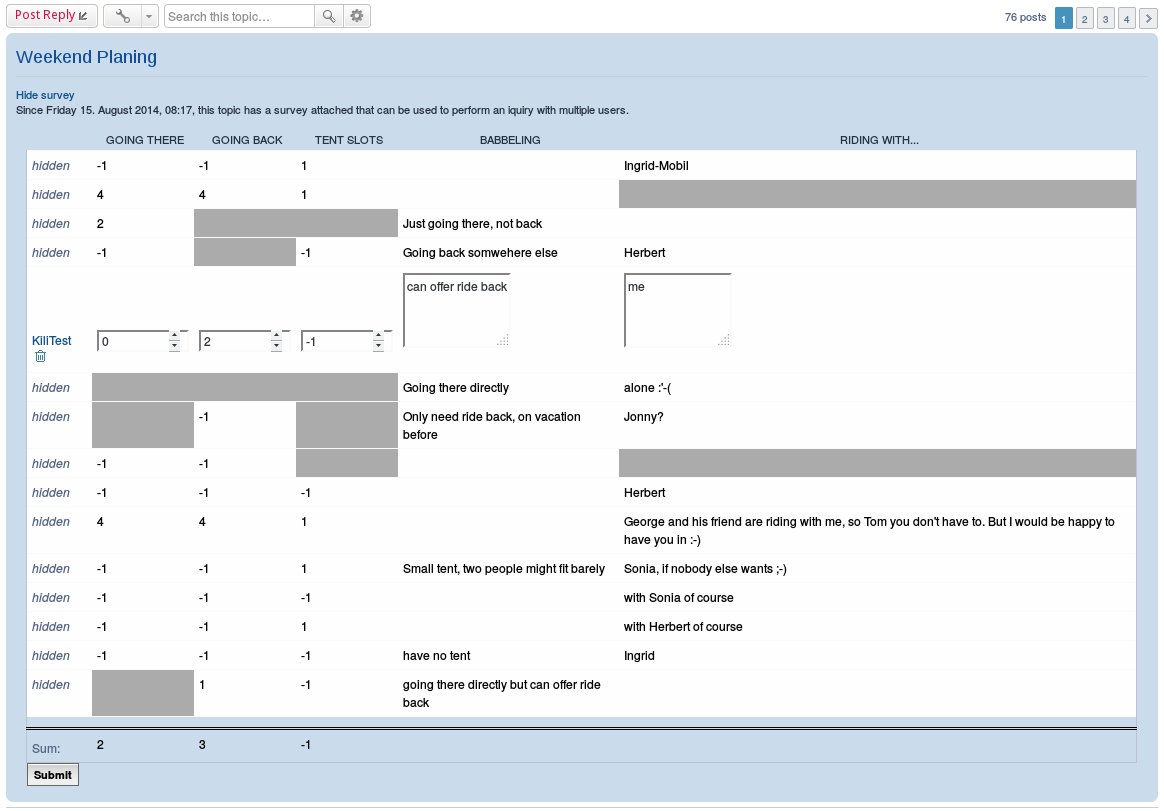 May you be so kind and explain how it works more in depth please?
I tried it and created "survey", ext is throwing SQL errors when wrong values to new question are provided.
This can be easily fixed by try-catch construction. Also, what are we supposed to fill in these textboxes?

by Ithron
Yes, so far you can really only fill out the label field

It is planned that you can specify different types of questions such as "text field", "checkbox" "drop-down-menü" and so on. In the last case, you can specify the choices, in all cases you can specify if you want to display a sum over all the answers for that specific question. In case of "test field" e.g., you would provide a string to compare with "e.g. 'yes'" in order to count positive responses.

Right now, all the inputs in the "new question" tab are still only there to have them somewhere. Most of them will change to a concrete option-selection when I implement it. So that is also why you get all those sql errors for now.

by LordOfFlies
Nice, thanks for explanation.
Things that are you saying are really nice. I have few ideas too, so here they are.

It would be nice to have "survey" or "test" below post itself. That´s extremely useful for tests.
After user completes test or survey, it will be accessible for him /she after some time period (6 months fe.)
Some finnal statistics would be nice too. Percentage based ranking.
Option to randomly switch answers position. For example, lets have a question:
"1+1 = ?"
Now there are four checkboxes:
1
2
3
4
Their position would randomly change when test begins.
Time limit would be very nice too.
Option to increase post number (it´s experience fe. on my board) based on % of right answered questions.

Sadly, I am desktop developer (C#) and I don´t know PHP, so I can´t help you.
If you implement ideas which i mentioned, your extension will completely move phpbb possibilities.

Best regards from me.

by Ithron
Let me comment on that:
One programming language isn't so much different from the other, really

(as long as we are talking imperative languages...). So just give php a try. If you want a nice programming experience though, I would not recommend you to use php but better move to python (for web-apps, e.g. django is great)... but I guess that is just much off-topic right now

1) Yes, questions will be static.
4) I quess one checkbox "randomize order of answers" would do the job. Keep it simple.

In fact I am a game programmer, targeting windows, android, iOS, mac and linux primary. When I had to do some web minigames, I did that via JS (Jq, Angular). I am learning PHP just for a half a year. I don´t like that language much. I used Python just for breaking some CMes.

by Jessica
Looks great; can you post screenshots please?

by Ithron
The extension is now finished. I raised the version to 1.0.0-b2 in order to get some feedback. In a week or so, I want to go release candidate and maybe submit the extension for validation at the end of the month.

@Jessica: I made some screenshots, they are linked in the first post

Feel free to try out the extension. If you had the phpBB3.0.x survey mod installed, the data will be converted to the new extension. Backup your data first, because the old data from the mod will be deleted after the installation of the extension!

For those you were using the mod, some remarks:

Will be new language strings added?

As long as we are not RC but beta, it might be possible that the language still changes, if that is what you are asking. Of course, the changes will be easy to track checking the history of the files on github.

If you are asking about translating the extension to other languages, I'm open to include further languages. It would be best to open a pull request on github for any changes or additions to the code (may it be languages or something else).

by LordOfFlies
When the extension will be in beta stage i´ll create czech and slovakia translation.
You are doing great work.

Ps: I´ve started with PHP, now I have many ideas how to improve Survey ext, expect pull request soon.

No more features will be added in the upcoming version 1.0.0, only bugfixes and new languages will occur.

So be sure to give it a try. After approx. two weeks in a stable state (no new bugs discovered) I want to go for submission into the extension database.

Ithron wrote:After submit, you see the survey at the top of the topic. Use the "propose new questions" tab to add questions.

This works only with the Prosilver Style.

I tested with Elegance, Aero, Simplicity Style and it doesn't work. I didn't see any tabs of the survey.

I've been using it for some weeks now and it is working fine.

One suggestion, for the future releases: it would be nice to have the possibility to assign points to the answers and have the total per user, something like

Thanks for the good job done so far.

P.S. I can provide you the italian translation if needed.

Ithron wrote:After submit, you see the survey at the top of the topic. Use the "propose new questions" tab to add questions.

This works only with the Prosilver Style.

I tested with Elegance, Aero, Simplicity Style and it doesn't work. I didn't see any tabs of the survey.

What do you propose? I cannot test this extension with all existing styles. It would be helpful if you could test, if the style-template is also working with other styles than prosilver.