I fully appreciate that everyone involved here does so on a volunteer and best efforts basis. That said ...

For the boards that I operate we've been well served by the policy to use only official phpBB releases and officially released extensions, so this precludes applying fixes directly from GitHub as they're not officially sanctioned phpBB releases.

Thus the essence of the problem for me is the known and now publicized security issue that affects phpBB 3.2.3 (and I presume lower) and the lack of clarity of whether the extensions that our boards use will be affected by the issue flagged in the first post of this topic. All my offline testing of the update has gone well but there is no way to know if this known issue will show up if we update our production board(s).

The known issue has been flagged as Major, but I would suggest based on what we know so far it probably could be considered "Blocking", I know that is how it is viewed for the boards I run.

In my specific case the only extension that seems like it might be affected is one of the Official extensions from the phpBB team, so I was hopeful there would be an answer from the developers on whether or not the extension was affected by this known issue. That's the only way I'd be comfortable moving forward to phpBB 3.2.4 based on the information that has been made available so far.
Normal people… believe that if it ain’t broke, don’t fix it. Engineers believe that if it ain’t broke, it doesn’t have enough features yet. – Scott Adams
Top

The version controls will certainly allow / enable this approach. Please do not say now, that would not be in view of an EOM.
I also think a PL or a very timely new phpBB-system version "3.2.5" is more effective for everyone Extension Writers involved.

I agree - it would be better to release a patched update 4.2.4. Most of the language packs aren't outside today, so the main group of people does not have downloaded this version yet. I don't think it is funny to answer hundreds of unnecessary support requests depending on this early known bugs.
Webseite, Blog, Wiki Deutsche Übersetzungen - german language files
My 2 cents: Whether an extension is in the CDB says nothing about its quality. It is more important to read the support topics for it. Better to avoid authors who do not answer support questions themselves, who do not update their stuff, and who do not fix bugs for years.
Top

Maybe a note (link) in the download page, that should do IMHO.

Looking for a specific feature or alternative option? We will rock you!
Please PM me only to request paid works. Thx. Want to compensate me for my interest? Donate
My development's activity º PhpStorm's proud user º Extensions, Scripts, MOD porting, Update/Upgrades
Top

Hence the thought of including version control. So then only a fast action remains, which a 3.2.5 before the end (EOM) remedy creates. Delays don't help and a cut must be possible.

Is there an estimated time of arrival for the 3.2.5 release?
David "Big Mac" Shepheard
Top

Could you provide two Screenshots from both menu points, please?
My extensions for phpBB: crizzo.de
German phpBB Support at www.phpbb.de
Top

But in Module management Language Packs really in different place: 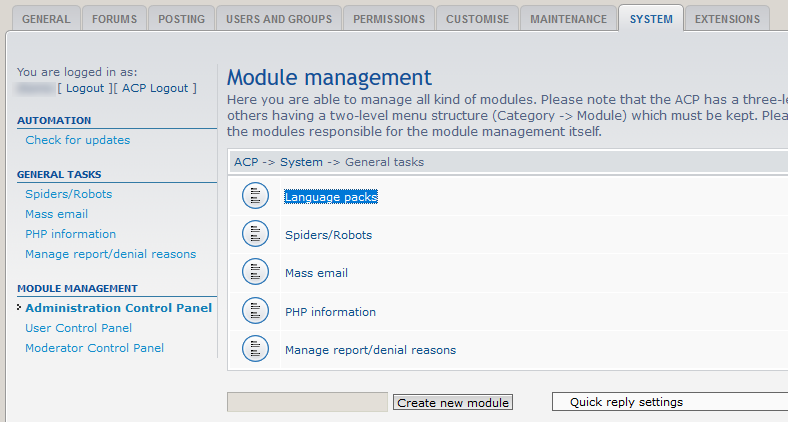 The same on two different forums after update from 3.2.3 to 3.2.4.
php 7.0.30 and php 7.2.12 if it helps.
Single Post extension
Forum Icons Extended
Hide Custom Profile Fields From Guests
Top

As it is not there on a clean install I am guessing that it is something carried over from a mod/extension in a previous version and it is probably safe to delete it.
David
Remember: You only know what you know and - you don't know what you don't know!
My CDB Contributions | How to install an extension
I will not be accepting translations for any of my extensions in Github - please post any translations in the appropriate topic.
No support requests via PM or email as they will be ignored
Top

IMHO it would be a good idea to link this topic in the update announcement so regular board owners are aware of these issues. Currently it is just mentioned in the middle of page 2 in the discussion topic, surrounded by some semi-off-topic discussion about Bertie and his mustache ....
Greetings, Frank
phpbb.de support team member
English is not my native language - no support via PM or mail
New arrival - Extensions and scripts for phpBB
Top

Download and unzip the attached. You will then find a folder called phpBB3 on your desktop. Within that folder there is another one called includes. Upload that to your boards root (where config.php is) and you will be asked if you want to overwrite bbcode.php and functions_content.php Accept that and the files will upload.

Then purge your boards cache, either from the ACP or (if you can not access the acp) by removing the contents of the cache directory on your server, leaving just index.htm and .htaccess

Your probably heard this question before but still having problem with managing extensions in version 3.2.4
I see the default extension (VigLink) in directory ext/phpbb but when I upload the same to either /ext or /ext/phpbb nothing shows in the extension manager. any ideas ?

Thanks for your help.
Top

useronthenet wrote: ↑
Thu Nov 29, 2018 12:01 pm
Your probably heard this question before but still having problem with managing extensions in version 3.2.4
I see the default extension (VigLink) in directory ext/phpbb but when I upload the same to either /ext or /ext/phpbb nothing shows in the extension manager. any ideas ?

Thanks for your help.

You're better of starting a new topic. It's likely to just be that they're not uploaded to the correct place.

Only extensions made by the phpBB team go in to /ext/phpbb
Start a new topic with the name of the extensions and a screenshot of your FTP window /ext folder
-:|:- Support Request Template -:|:-

Cheap UK Hosting
"In the land of the blind the little green bloke with no pupils is king - init!"
Top
Locked
43 posts