Any abandoned Extensions will be moved to this forum.

WARNING: Extensions in this forum are not currently being supported or maintained by the original Extension author. Proceed at your own risk.
Forum rules
IMPORTANT: Extension Development Forum rules

WARNING: Extensions in this forum are not currently being supported nor updated by the original Extension author. Proceed at your own risk.
Locked
258 posts 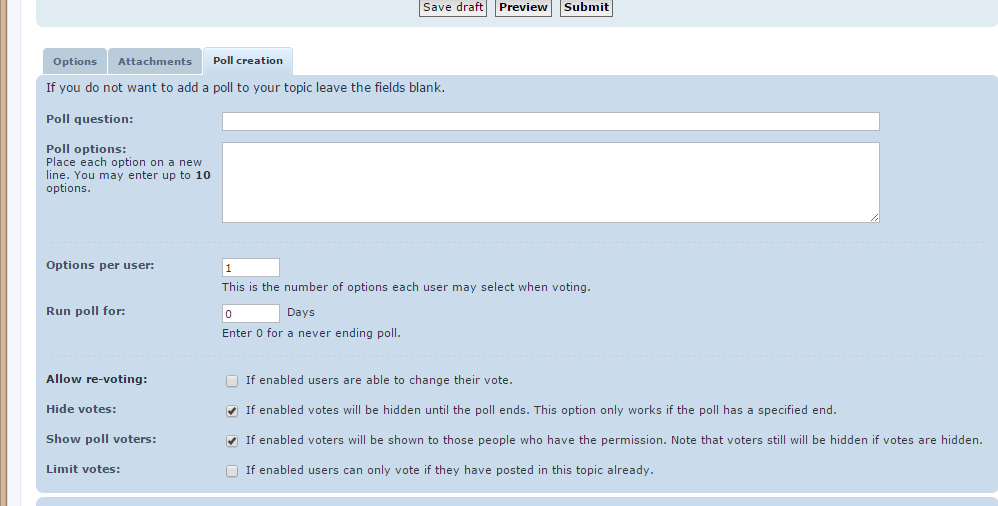 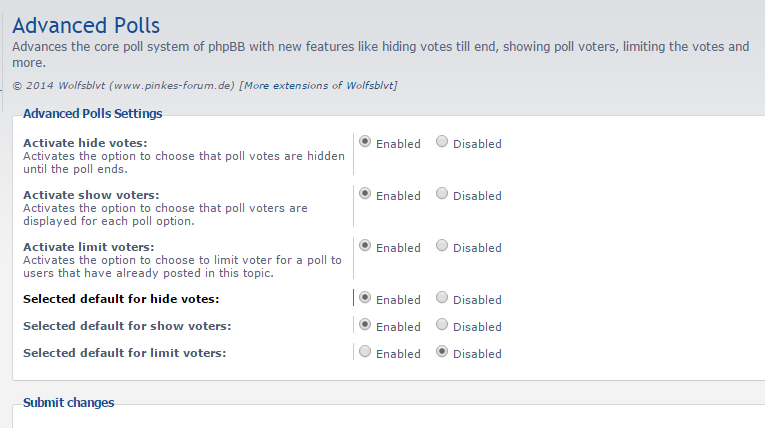 Installation: Copy the contents of the downloaded file to the ext/wolfsblvt/advancedpolls folder. Make sure that the file named "composer.json" is placed exactly in the mentioned folder.

More Information:
There are multiple features missing in the core poll system of phpBB, and that improving those would be useful for many people, so we decided to combine several use cases from each of us into a single more complete extension that would advance the phpbb poll system. Here is it now!
Of course, things may be improved always, so if you have suggestions, we want to hear them.

If you don't like the styling of the poll voters list, it can be easily modified in css, even with limiting the usernames displayed, etc.

In this version, subsilver2 support is NOT provided. We are planning to include it at a later time, but for now, subsilver2 is NOT supported with this version for all the functionality. If someone wants to make it work in subsilver2, we would gladly accept a PR with those changes, to be incorporated into a future version.

This extension is fully compatible with the new ajax calls where the site isn't reloaded when you vote.

If you have further suggestions for new functionality, please, mention them here, and we will evaluate them, and potentially include them (no commitments!).

Bug reports for this extension in this thread please, or on GitHub.
Last edited by javiexin on Sat Dec 03, 2016 8:28 pm, edited 2 times in total.
Top

I am a little bit lost, I cannot find changed or added lang-variables. I want to update the Swedish translation via GitHub.
Top

There is no function on github for this?
Top

Not that I know of, but my knowledge of GitHub is very limited.
Top

Ok! I will look around a little bit!
Top

So your "old" version is abandonned ?
Need to delete all settings then upload new version ?
French Blog : Parigot-Manchot
Top

draky wrote:So your "old" version is abandonned ?
Need to delete all settings then upload new version ?

The "old" version is not abandoned, it is "old"

This version supersedes the other one, with the same existing functionality and much more.

To install over the old one, I would recommend that you:
1) Disable OLD version
2) Delete data from OLD version
3) Remove from filesystem
4) Copy new version in place
5) Enable NEW version
Just like with any other extension you upgrade...

Poll data will not be lost. Only thing you will loose are the permissions that you might have granted, that you need to grant again anyhow (permission has changed).

Once you upgrade, same as if you do a fresh install, you will need to, at least, do the following:
1) Configure global extension settings in the "Extensions" tab of the ACP
2) Configure permissions, both for users to be able to See Poll Voters (changed permission from old version), and for Moderator to see Poll Voters either globally or per forum (new permission in this version).

That should do it...
Regards,
-javiexin
Top

Thank you. Here is some feedback:

Responses in order:
Thanks a lot for the feedback, very helpful.
-javiexin
Top

Regarding the language issue, please test the following:

Disable all extensions except Advanced Polls, and try again. If language works fine this way, the problem is probably in some other extension missing a language file, and forcing the whole board to default to English. If that is the case, then make sure you have language files for all of your extensions... And I guess you should open a new ticket, as this should not happen (a problem in one extension should not affect the behavior of another).

Thanks for reporting this,
-javiexin
Top

Thank you for the reply.