Menu
Warning: The author of this contribution does not provide support for it anymore.

Hi, I haven't used phpBB in several years. In fact, I'm new to phpBB3 in general, but I have now installed a new forum and would love to get this Advertising Management 1.0.9 mod up and running, however, I can't seem to find any step-by-step instructions. I could find nothing in the downloaded package explaining where each file or directory need to be placed. In the "old days" of phpBB2, I remember each mod I used having some pretty simple instructions included in a text file... but I don't see that with this mod. Can you tell me if I'm just crazy and they are, in fact, in the package somewhere, or provide me with a link to them online? I'd really appreciate it.

Open the install.xml file with your web browser.

Thanks! That definitely helps, although now I'm not sure what to do... the instructions say to install the contents of the root directory into the root directory of my phpBB3 installation, but doing that would overwrite what's in there... is that OK? I just want to make sure it's not going to screw up my forum if I replace the adm, includes, language, and styles directories with those that came with this mod. For one thing, I had to edit the styles>prosilver>imageset directory to get my customized logo and forum icons to show up... so replacing styles would overwrite all that stuff.

The included files do not overwrite any existing files.

EXreaction wrote:The included files do not overwrite any existing files.

How? If I FTP the included directories that are named the exact same as the ones already on my server, my FTP program asks if it's OK to overwrite the ones that are there. So it appears that they *would* overwrite them, unless they're supposed to go somewhere other than the root directory of the phpBB install. The instructions say nothing about this. So can you please explain how they won't overwrite my current files?

Yes, the directory names are the same. What exactly is it asking to overwrite?

EXreaction wrote:Yes, the directory names are the same. What exactly is it asking to overwrite?

Wow, I can't believe I have to explain this... OK, when you have a directory already on your server that has the same name as one that you are trying to upload via FTP, the FTP program (I'm using Transmit) warns you that there is already a directory there by that name. So at that point you have to decide whether to Stop, Skip, Replace, or Merge the two. See the attached screenshot: 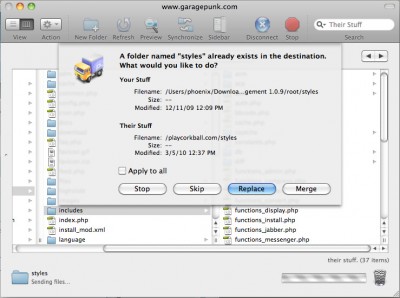 Now, why would I replace, for example, the styles directory? For one thing, as I stated earlier, that directory contains a file which I have previously edited... in prosilver>imageset. I edited the imageset.cfg file so that it appropriately displays my site logo instead of the default phpBB one. And the imageset directory also contains my custom site logo as well as a couple of other custom icons I uploaded to it. So if I were to proceed with the install of this mod, those would be lost! Does this not make any sense?

The same could hold true for the other directories that I'm supposed to replace with this mod install... adm, includes, and language. All four of those directories already exist. Don't you see how this is confusing? That we are supposed to just blindly replace what's already on our server with the directories contained in this mod, and risk messing something else up in the process?

You do not replace, you copy the new files into the directory.

You use a silly FTP program (although I believe OSX does the same thing). You have to merge it in.

Use a real FTP application and it won't ask stupid questions such as if it should replace an entire directory because you have new files to add in it.

OK, I went ahead and merged everything in. I did not realize that the files contained within those directories were different from what's up on the server already, so that makes sense.

I also followed the rest of the instructions and changed the other files accordingly and replaced them on the server, and next I went to the "How to add positions" tutorial, but I'm not seeing the Advertisement Management module in the ACP (under General -> Board configuration). It's just not there. I even cleared the cache on my browser and also refreshed the Prosilver template (not the theme itself) under Styles -> Style Components -> Templates, but still... no ad management module.

What did I do wrong?

Thanks again for your help,
kopper

Try running the ads/uninstall.php file in your web browser and see if it starts working after that.

EXreaction wrote:Try running the ads/uninstall.php file in your web browser and see if it starts working after that.

OK, I tried, and here's what happened:

First, I got an error message: "This version of UMIL is outdated."

But I went ahead and clicked YES to uninstall, and then got:

Warning
One or more errors occured during the requested action. Please download this file with the errors listed in it and ask the mod author for assistance. If you have any problems downloading... (snipped)

The file I downloaded says:

How can the module not exist if I followed all of the installation instructions to a "T"?

I just tried it again and it worked:

But it still says this version of UMIL is outdated.

And "Advertising Management" is still not appearing under Board Configuration.

Ignore the warning about UMIL being outdated.

I have yet to figure out why the module does not show up once in a while.

If you run the ads/uninstall.php file again, does it say module does not exist or does it say success? If you try it a few times make sure to check in the ACP after running it each time (the database part is installed automatically again after viewing any other page in the forum).

I have yet to figure out why the module does not show up once in a while.

If you run the ads/uninstall.php file again, does it say module does not exist or does it say success? If you try it a few times make sure to check in the ACP after running it each time (the database part is installed automatically again after viewing any other page in the forum).

Is there something else I should be doing after I uninstall it? If I uninstall something, how is it going to get reinstalled unless I do something else? It's not just going to get reinstalled by me visiting the forums again, is it? I went back to the install.xml page but I've already done all of those uploads/changes. I just don't know what else I should be doing to make this work, especially after I uninstall it...?

UPDATE: It worked. I tried it again and now I see the Advertising Management link at the bottom under Board Configuration. Wow, what a relief. OK, thanks for your help. I'll see if I can get this set up to display my Google Adsense ads now.