3.0.x Style
Bl@ck
Prosilver based style that features rounded corners, and grey/black in color. It uses the prosilver template. Internet Explorer does not yet support CSS3 text-shadow. Recommended Browsers for all features are Chrome and Firefox. 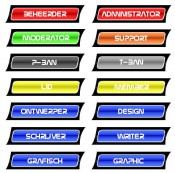 3.0.x Style
Blue and Black Smilies
Some Blue and Black smilies. Unlike my other smilies, these are completly new. .pak included, however are designed to overwrite the existing ones and work. Created in Macromedia Fireworks and are 22x22px

3.0.x Style
Blue/Yellow Ranks Images (14)
These rank images are 5x79pixels and are in .gif format. Very small file-size at about 100Bytes.